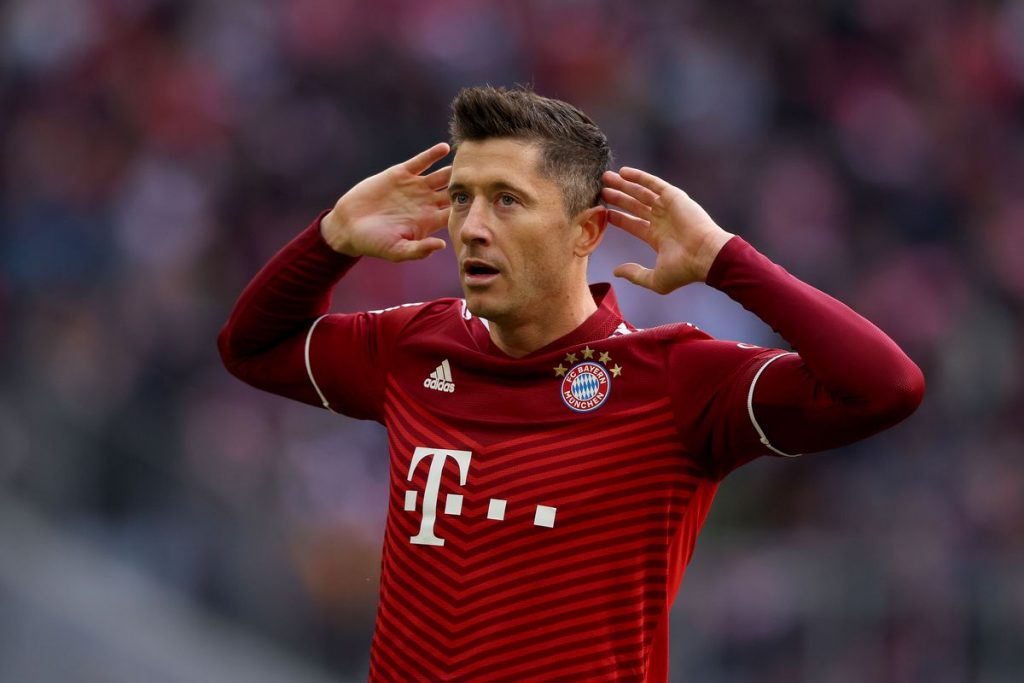 The 2021/22 Bundesliga campaign has reached its climax and it was a productive campaign for the designated goal-scorers of most teams. In fact, 4 of the top-5 hit-men were proper centre-forwards, known as the traditional no.9 in football. Here, we take a look at the highest goal-scorers of the recently concluded season.

Robert Lewandowski finished as the top goal-scorer in the 2021/22 Bundesliga with 35 goals. This was the 7th time in his career that he accomplished the achievement, putting him at par with the legendary Gerd Müller for the most Torjägerkanone awards.

He has now won it 6 times in the colours of Bayern München and it is also his 5th in succession. This was his 5th season in the Bundesliga where he struck 30 or more goals and lifted his 10th league-title in Germany, two of which were won during his time at Borussia Dortmund.

After setting a Bundesliga record of 41 goals in the previous campaign, Lewandowski started the season in superb fashion, getting on the score-sheet in each of the opening 5 matches, including a hat-trick against Hertha Berlin.

He scored another one at Köln in January to bring up 300 Bundesliga goals, only the 2nd player in history to reach that milestone, while he also bagged a couple of hat-tricks in the Champions League where racked up 13 goals in just 10 games. But despite all these glorious accolades, the Poland striker may well be making his way out of the club this summer.

With 24 goals from just 27 appearances, Patrik Schick finished in 2nd position amongst the top goal-scorers in the Bundesliga this season. It was by far the most productive campaign for the Czech striker, who was often regarded to be unfulfilled potential.

After a couple of hugely underwhelming years at AS Roma, Schick enjoyed a good season-long loan-spell at RB Leipzig which was enough to persuade Bayer Leverkusen to part with €26.5 million for the centre-forward in 2020.

While his first season at the club was far from satisfactory, Schick certainly started this season in fine form scoring 8 times in the opening 8 league-fixtures. But everyone took notice as he struck 4 goals past a hapless Greuther Fürth side before scoring a brace in the two subsequent fixtures against Eintracht Frankfurt and Hoffenheim to land the prestigious ‘Player of the Month’ award in December. His form following the winter-break was not as prolific however and an injury also kept him out of action for a couple of months which effectively ruled him out of the race for the Torjägerkanone.

After netting 40 league-goals during his first 18 months at Borussia Dortmund, many expected Erling Haaland to break Lewandowski’s stranglehold on the Bundesliga top goal-scorer chart this season. But it did not quite pan out that way as injuries limited Haaland to just 24 appearances during which he still racked up a highly impressive tally of 22 goals.

The 21 year old striker began with a truly stellar display in the season-opener against Eintracht Frankfurt, scoring 2 goals and assisting another couple to set him on the way for the ‘Player of the Month’ in August. He scored 3 consecutive braces against Bayer Leverkusen, Union Berlin and Mainz 05 on either side of an injury-layoff before racking up his 50th Bundesliga goal against Wolfsburg in November to become the youngest-ever player to reach that mark, as well as the quickest in terms of appearances.

While the young Norwegian kept scoring at frenetic pace another injury following the midseason-interval ruled him out for a couple of months and he did not quite hit the ground running after his return from the treatment-table. Nevertheless, he managed to score 6 goals in his last 5 appearances for Dortmund, courtesy of a hat-trick against Bochum in April, before announcing a €60 million transfer to Premier League stalwarts Manchester City for next season.

With 20 goals and 13 assists, Christopher Nkunku was the most outstanding player in the Bundesliga this season and thoroughly deserved to collect the ‘Player of the Season’ award earlier in the month.

Signed from Paris Saint-Germain in his home-country of France in 2019, Nkunku had shown more than a few flashes of brilliance previously for Leipzig but nobody quite expected the performances he delivered in this campaign, especially with RB Leipzig enduring an extremely challenging season.

So it was not exactly a breakthrough campaign for the 24 year old Frenchman, yet his goal-scoring exploits were totally unexpected as he barely scored half that amount in his previous two seasons at the club. In fact, Nkunku first struck a hat-trick in Leipzig’s woeful Champions League campaign before opening his league-tally. With the arrival of Domenico Tedesco as the new manager, the fortunes of the club picked up as did the scoring-rate of Nkunku, who also collected the final three ‘Player of the Month’ awards.

At a ripe age of 34, Anthony Modeste enjoyed one of the most productive seasons of his career, scoring 20 goals in 32 appearances. In his 2nd spell with Köln after a couple of prolific years from 2015-17, Modeste was not able to rekindle the same form after he returned to the city from the Chinese Super League in 2019, with the club in the 2nd tier of German football at the time. Then he failed to open his league-tally in the opening-half of last season before moving on a loan-deal to Saint-Étienne in his native France where he was unable to break his duck as well.

So it was quite surprising to see incoming manager Steffen Baumgart place his trust in the journeyman-striker, although that faith has now been well repaid. Modeste began with 4 goals in the opening 5 fixtures before adding another 4 goals to his tally by the end of November.

The club enjoyed a fine patch of form in the winter with Modeste scoring 7 times in 8 matches on either end of the midseason-break. A two-month period then followed without the striker getting on the score-sheet before he netted 5 goals in the last 5 matches to rack up a 20-goal season for the 2nd time with Köln.